The calamities that befall the hapless creatures of Aesop’s Fables! The fox can’t reach his grapes, then gets attacked by biting flies and loses his tail in a trap. And things don’t go much better for the hare, who is chased relentlessly by a hound, barely escaping with his life—only to be beaten in a race by a lowly tortoise. Misfortune turns to mayhem when a wolf is killed by his sweetheart’s father, a sheepdog preys on his own flock, and the mouse and his friend the frog are eaten by a hawk. On the brighter side, a tiny ant saves her new friend the dove from a hunter’s arrow, a bat persuades two different weasels not to eat her, and a kid goat uses his wits to escape from the jaws of a hungry wolf...

For nearly three thousand years, the fables of Aesop have amused people of all ages as they provide commonsense lessons in the conduct of everyday life. The colorful characters and brief tales, by turns amusing and frightening, deliver a how-to course in applied moral philosophy. This edition features more than forty illustrations by the celebrated artist Ernest Griset.

Aesop was an Ancient Greek fabulist, or storyteller, credited with a number of fables now collectively known as Aesop's Fables. Although his existence remains uncertain, numerous tales credited to him were gathered across the centuries and in many languages, in a storytelling tradition that continues to this day. 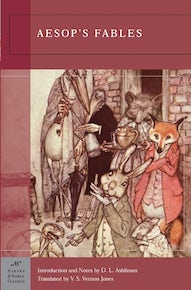