The Metamorphosis and Other Stories

The Metamorphosis and Other Stories

Only yesterday, Gregor Samsa was a meek salesman, browbeaten by his unappreciative employer and depended on fiercely by his ungrateful family. This morning, Gregor awakens to discover that, overnight, he has been transformed into a monstrous insect. As Gregor frantically tries to conceal his predicament, neither his family nor his unsympathetic employer accept that a terrible metamorphosis has upended his existence. Is Gregor’s condition only temporary? Will he eventually revert back to the person he was and resume his normal life? Or might he have to accept that his transformation is only an outward expression of how he—and those in his life—actually see him?

First published in 1915, Kafka’s best-known tale has inspired numerous interpretations for more than a century and helped to establish the term “Kafkaesque” as a reference to a bizarre and nightmarish experience. This collection of his short fiction, in a new translation, includes more than 30 of his short stories and sketches, including “In the Penal Colony,” “The Stoker,” “The Judgment,” “A Country Doctor,” “A Hunger Artist,” and more.

Franz Kafka (1883–1924) was one of the major fiction writers of the twentiethth century. He was born to a middle-class, German-speaking Jewish family in Prague, Bohemia (presently the Czech Republic). His unique body of writing—much of which is incomplete and was mainly published posthumously—is considered to be among the most influential in Western literature. 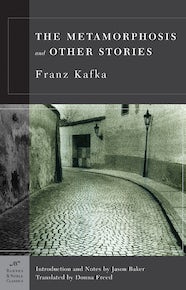