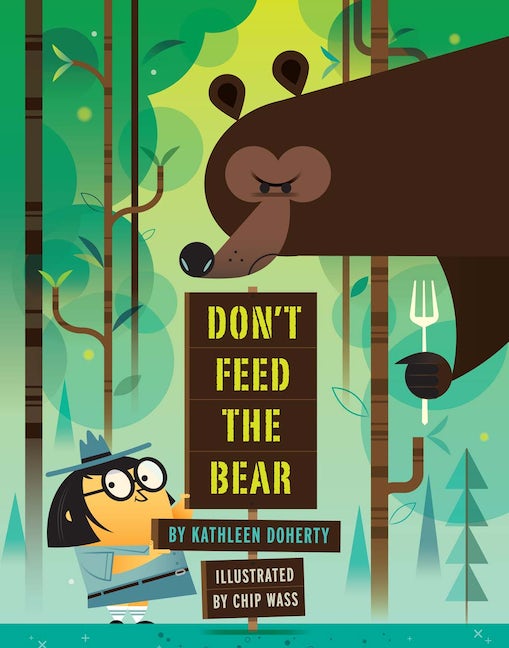 It’s Bear vs. Ranger in the funniest food fight ever.

“Delightfully funny, with much verve and style . . . ” —KirkusReviews.com

Mac and cheese, Carrot cake, Meatball stew: Bear loves when campers leave him grub. The park ranger does not. Smackity smack, Ranger pounds a sign into the ground: DON’T FEED THE BEAR! Upset—no more chewy cookies? No more juicy burgers?—Bear quickly crosses out the “don’t.” Now, it’s war in the park! But when both Bear and Ranger end up losing out, will the two antagonists finally call a truce? With its delightfully cartoonlike pictures and clever wordplay, this picture book will keep kids laughing for hours.

“In this children’s picture book, a park ranger and a bear each warn tourists not to feed the other. Portly, brown Bear lives in a park and loves campers’ leftovers. So when he discovers the park ranger installing a sign that reads ‘DON’T FEED THE BEAR,’ he’s displeased and puts up his own: ‘DON’T FEED THE RANGER.’ As a result, campers with pie, ice cream, and soda feed neither one. Bear craftily disguises himself in a cap and T-shirt that claim that he’s ‘not a bear.’ But it doesn’t work, leading to a ‘war with words’ as bear and ranger repeatedly vandalize each other’s signs with spray paint, markers, and brushes. They finally come to an understanding, however, and revise the signs to encourage visitors to feed them both. Together, they enjoy a delicious picnic of campers’ ‘goodies.’ In her debut, Doherty tells an amusing story with good sound effects (‘SMACKITY! SMACK! WHOMP!’) and vivid, compressed sentences perfect for reading aloud. Children will certainly appreciate the characters’ love of treats. Wass’ (Monster Knows Shapes, 2014, etc.) stylish, retro-feeling illustrations hilariously capture action and character, such as Bear’s angry yet lovable stomping. . . . Delightfully funny, with much verve and style . . . ” —KirkusReviews.com
-

Kathleen Doherty has taught elementary school for over 30 years in Chicago. She’s a Reading Specialist and an Educational Specialist in Curriculum and Instruction who enjoys writing humorous stories and reading aloud to kids. Her work has appeared in TIME magazine, The Mailbox, Highlights for Children, Highlights High Five, Highlights HELLO, and Spider Magazine. She has won the Highlights Pewter Plate Award, the Highlights Celebrate National Poetry Contest, and a letter of merit from SCBWI’s Magazine Merit Competition. She currently lives in Schererville, IN.