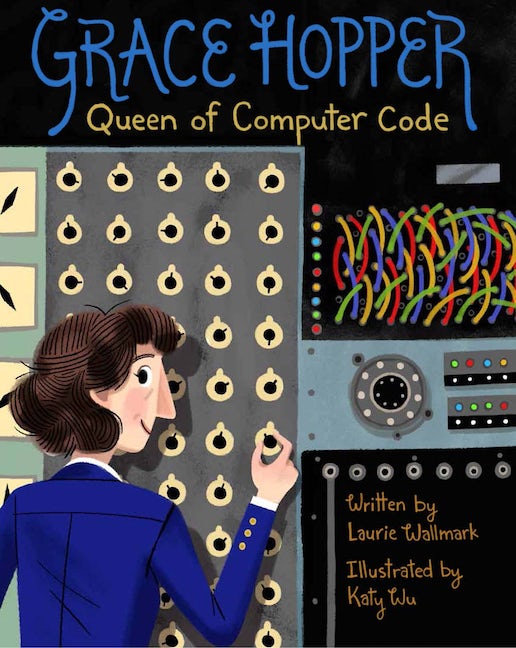 “If you’ve got a good idea, and you know it’s going to work, go ahead and do it.”
The inspiring story of Grace Hopper—the boundary-breaking woman who revolutionized computer science—is told told in an engaging picture book biography.

Who was Grace Hopper? A software tester, workplace jester, cherished mentor, ace inventor, avid reader, naval leader—AND rule breaker, chance taker, and troublemaker. Acclaimed picture book author Laurie Wallmark (Ada Byron Lovelace and the Thinking Machine) once again tells the riveting story of a trailblazing woman. Grace Hopper coined the term “computer bug” and taught computers to “speak English.” Throughout her life, Hopper succeeded in doing what no one had ever done before. Delighting in difficult ideas and in defying expectations, the insatiably curious Hopper truly was “Amazing Grace” . . . and a role model for science- and math-minded girls and boys. With a wealth of witty quotes, and richly detailed illustrations, this book brings Hopper's incredible accomplishments to life.

“[T]he author paints an engaging portrait of a unique woman in this bright and informative biography. . . .The vibrant palette and straightforward composition are eye-catching, and Hopper’s curiosity, love of learning, and ambition shine through in her expressive features. . . . VERDICT Inquisitive readers who, like Hopper, ‘want to understand how things work’ will appreciate this upbeat biography of a woman who was ahead of her time.A sound purchase for most collections.” —School Library Journal

“. . . an upbeat biography . . . Newcomer Wu’s digital illustrations are rendered in a vivid and appealing cartoon style that harmonizes with Wallmark’s enthusiastic writing, which emphasizes how Hopper’s accomplishments arose as much from her intuition as her number sense. Quotes from Hopper, scattered throughout, further amplify the personality and drive of a trailblazing programmer.” —Publishers Weekly

“Grace Hopper was mechanically, scientifically, and mathematically minded since childhood, as this biography playfully explains via several anecdotes. Then, while serving almost fifty years in the Navy, she broke barriers for women--and for computer science. A  biographical poem graces the front endpapers; the back endpapers mention Hopper's honors. Kid-appealing digital cartoons are reminiscent of Hopper's own propensity for doodling. Reading list, timeline. Bib.” —Horn Book
-

Laurie Wallmark is passionate about getting the word out to young people about successful women in science. She has degrees in Biochemistry from Princeton University, Information Systems from Goddard College, and Writing for Children and Young Adults from the Vermont College of Fine Arts. Her debut book was a picture book biography of Ada Byron Lovelace, the world’s first computer programmer. Ada Byron Lovelace and the Thinking Machine (Creston Books) received four starred reviews (Kirkus, Publishers Weekly, Booklist, and School Library Journal), praise in The New York Times, and numerous awards. Laurie lives in NJ. Follow her on Facebook: @lauriewallmark.

With a BFA in Illustration and Entertainment Arts from Pasadena Art Center College of Design in 2007, Katy Wu has worked for Google, Laika, Pixar, CinderBiter, and Simon & Schuster. Grace Hopper is her first picture book; her second, Dumpling Dreams, written by Carrie Clickard (Simon and Schuster), is scheduled for fall 2017. Having worked on such projects as the feature film Coraline, and various shorts (La Luna, Car Toons) as well as CG, 2D, stop motion, online games, and content for social media platforms, Katy is an incredible talent. She lives and freelances in New York City. Follow her online at katycwwu.tumblr.com. 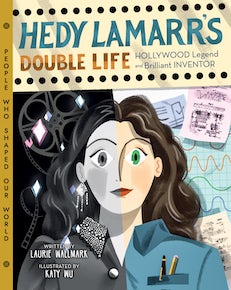