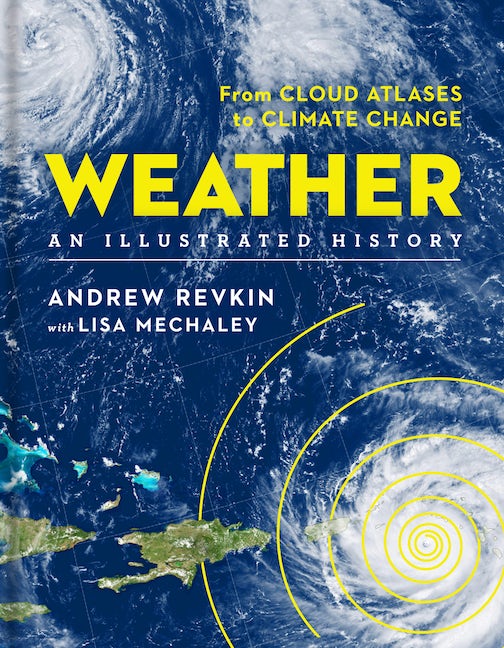 “Beautifully illustrated . . . Think of this book like dining on tapas, boasting savory flavors, some unexpected, that constitute a satisfying whole.” —Washington Post

Colorful and captivating, Weather: An Illustrated History hopscotches through 100 meteorological milestones and insights, from prehistory to today’s headlines and tomorrow’s forecasts. Bite-sized narratives, accompanied by exciting illustrations, touch on such varied topics as Earth's first atmosphere, the physics of rainbows, the deadliest hailstorm, Groundhog Day, the invention of air conditioning, London’s Great Smog, the Year Without Summer, our increasingly strong hurricanes, and the Paris Agreement on climate change.

Written by a prominent and award-winning environmental author and journalist, this is a groundbreaking illustrated book that traces the evolution of weather forecasting and climate science.

Praise for WEATHER: AN ILLUSTRATED HISTORY

“In a new, beautifully illustrated book, Andrew Revkin, best known for his decades of science and environment reporting at the New York Times, describes many of the most pivotal moments, critical scientific breakthroughs and important people in the climate’s rich and varied 4.5 billion-year history. ‘Weather: An Illustrated History, From Cloud Atlases to Climate Change,’ explores the atmosphere’s evolution, the scientists who tried to make sense of it, and the complex and sometimes-turbulent relationship between people and the elements. . . . Revkin loosely weaves together this history in 100 short, easy-to-consume vignettes. Think of this book like dining on tapas, boasting savory flavors, some unexpected, that constitute a satisfying whole. Among many other topics, the book discusses Aristotle’s ‘landmark’ contributions to meteorology. It explains how scientists figured out how rainbows work. It tells the story of inventor Charles F. Brush, who built a giant windmill in Cleveland in 1887 that powered his mansion for 20 years. It presents what is probably the first-ever photograph taken of a tornado. And it even delves into the polar vortex.” —Washington Post

“FINALLY, someone has done something about the weather. Andrew Revkin and Lisa Mechaley have given us a startlingly fascinating book about how weather got the way it is, and how we’ve reacted to it, used it, and even helped shape it. There are a hundred captivating stories in this book that are as enlightening as they are fun. Reading them is like seeing the clouds part and the sun come out.” —Alan Alda, longtime host of Scientific American Frontiers and a founder of the Alan Alda Center for Communicating Science at Stony Brook University

“Informative, addictively readable, and never preachy, Weather: An Illustrated History tells the fascinating story of humanity’s ever-evolving relationship with the earth’s climate. Highly recommended.” —Nathaniel Philbrick, National Book Award winner for In the Heart of the Sea: The Tragedy of the Whaleship Essex

“Weather: An Illustrated History is a gift of a book—at once fascinating, informative, and surprising.” —Elizabeth Kolbert, Pulitzer Prize-winning author of The Sixth Extinction

“A slim book about a weighty subject with a light touch, Weather: An Illustrated History has a wonderfully sprawling cast of characters, from Alexander von Humboldt and ‘Snowflake’ Bentley to Frankenstein's monster and the editor of the Farmer's Almanac. I won't soon forget the image of Benjamin Franklin charging off after a huge dust devil, leaving the rest of his party to gape in astonishment as he repeatedly horsewhipped the whirlwind to see if he could interrupt its progress. Or the great solar flare of Sept. 1, 1859, which lashed the Earth with such ferocity that the night sky glowed across the planet and electric surges through telegraph wires set telegraph offices afire.” —Charles C. Mann, bestselling author of 1491: New Revelations of the Americas Before Columbus and The Wizard and the Prophet
-

Andrew Revkin is one of America’s most honored and experienced journalists focused on environmental and human sustainability. In the spring of 2018, he joined the staff of the National Geographic Society as strategic adviser for environmental and science journalism. Formerly the senior reporter for climate issues at the Pulitzer Prize-winning ProPublica and the Pace University Senior Fellow for Environmental Understanding, he has reported on science and the environment for more than three decades, mainly for The New York Times. He has written on global warming science and solutions and energy issues since the 1980s, from the North Pole to the White House, and is among those credited with first proposing that we have entered a “geological age of our own making,” known increasingly as the Anthropocene. He has won top awards in science journalism multiple times, along with a Guggenheim Fellowship. Revkin has written acclaimed books on global warming, the changing Arctic, and the violent assault on the Amazon rain forest, as well as three book chapters on science communication. Drawing on his experience with his Times blog, Dot Earth, which Time Magazine named one of the top 25 blogs in 2013, Revkin has spoken to audiences around the world, including at the United Nations and Vatican, about paths to progress on a turbulent planet. In spare moments, he is a performing songwriter and was a frequent accompanist for Pete Seeger. He lives in Cold Spring, NY, with his wife and coauthor, Lisa Mechaley, who is an educator at the Children’s Environmental Literacy Foundation.