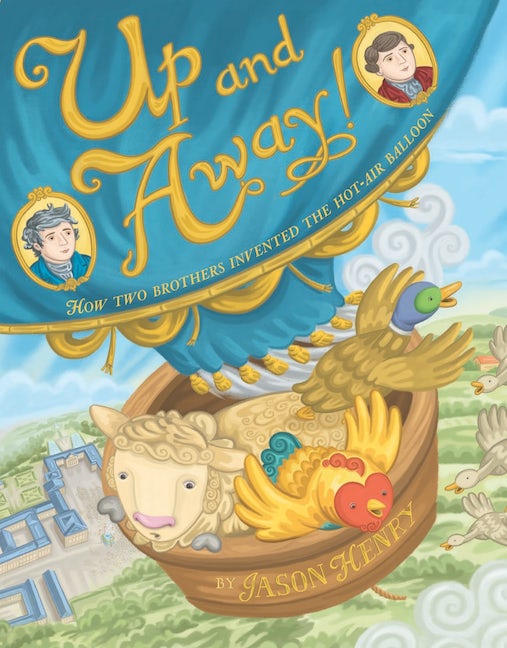 “It will . . .  sweep readers away.” —Kirkus Reviews
“Henry’s lush, digital artwork depicts the splendors of eighteenth-century France . . . a good addition to units on aviation and inventors.” —Booklist

More than a century before the Wright Brothers invented their plane, Josephand Étienne Montgolfier sent a flying machine into the skies—a hot-air balloon with three animals in the basket. Go up, up, and away with them on their first, magical journey!

Back in 1782, in Ardèche, France, lived Joseph Montgolfier, a dreamer and an inventor who liked to learn about how everything worked. When one day a gust of wind blew his papers into the fireplace, he noticed that something lifted the pieces into the air—and he realized that heat could make things rise.  With the help of his brother, Étienne, he began to experiment . . . and created a new kind of flying machine: a hot-air balloon! This beautifully illustrated picture book tells the story of how the balloon came to be, King Louis XVI’s visit to see it fly, and the three animals—a rooster, a duck, and a sheep—who became its very first passengers.

“Designer Henry's authorial debut explores the 18th-century invention of the hot air balloon. Joseph-Michel Montgolfier, a Frenchman, had always found the mechanics of the world fascinating. One day, some of his papers drifted into his fireplace, and to his surprise, he noticed that the smaller pieces were rising above the flames. He realized that if the gas released by the fire had the ability to lift paper, it might be able to carry other things as well. He set about testing his hypothesis, and, with his brother Jacques-Étienne, he crafted ‘the world's first flying machine’: a hot air balloon they called an ‘aerostat.’ When Louis XVI got wind of their invention, he requested a demonstration, and the brothers set about planning, fitting the outside of their balloon with ornamentations fit for a king. When the day arrived, they famously sent a rooster, a duck, and a sheep up in their balloon, hosting for both the king and many French citizens the first-ever public demonstration of a hot air balloon. Henry's narration is straightforward but engaging. The illustrations, rendered digitally, use a slightly dusty color palette that combines with such design elements as ornate golden frames in closing text boxes to nicely evoke the setting and era (all humans depicted are white). Backmatter includes a bibliography, list of further reading, and timeline of flight. . . . it will . . .  sweep readers away.” —Kirkus Reviews

“Henry details the activities of two brothers, Joseph-Michael and Jacques-Étienne Montgolfier, inventors of the hot-air balloon. Describing Joseph as dreamy, the author imagines that he noticed the lifting properties of hot air while gazing into a fireplace, inspiring the balloon that his practical brother Étienne helped him to build. Henry describes their early attempts (involving a small taffeta box held over a flame), larger trials (entailing a cloth bag suspended over an open fire), and a public demonstration for King Louis XVI of France that carried aloft a rooster, a duck, and a sheep. Henry’s lush, digital artwork depicts the splendors of eighteenth-century France, particularly those found in the clothing, architecture, and household furnishings. The style is mostly realistic, with somewhat exaggerated facial features for the three animals, who appear in most spreads, following the story’s every action. Concluded with an author’s note, further reading, and an extensive time line of the history of flight (up to the present), this makes a good addition to units on aviation and inventors.” —Booklist

“A delightful nonfiction picture book that relays the interesting history of the hot-air balloon in France in the late 1700s. The Montgolfier brothers, Joseph and Étienne, had unique talents. Joseph was a reader, dreamer, and inventor who longed to create new things, while Étienne successfully managed the family’s paper-making factory. Together they experimented with heat and types of paper materials to create the world’s first flying machine, the hot-air balloon. Through trial and error, the brothers embark upon creating a presentation of their invention to King Louis XVI at the Palace of Versailles. In order to illustrate the balloon’s potential to transport people in the future, the passengers on the first public hot-air balloon flight were three animals: a duck, a sheep, and a rooster. This engaging story of two French brothers will entertain a wide range of children, as the story line is clear and the accompanying colorful illustrations provide younger readers with visual guides to the plot. VERDICT This book would be a great read-aloud for early grades—and an easy addition to nonfiction collections.” —School Library Journal online

“What a beautiful and elegant book for any kid (or kid at heart) who loves history. UP AND AWAY is truly special—treat yourself right now.” —Brad Meltzer, author of the Ordinary People Change the World series
-

Jason Henry is an author, illustrator, and book designer, is a Publishers Weekly Star Watch Honoree, and has received multiple awards for his book designs from The New York Book Show. Jason has contributed illustrations to award-winning titles such as Mysterious Messages by Gary Blackwood (Dutton Children’s Books). He is also the designer of the 2016 Newbery Honor book, Roller Girl by Victoria Jamieson, New York Times bestselling titles such as Brad Meltzer's Ordinary People Change the World series, Dragons Love Tacos 2 by Adam Rubin and Daniel Salmieri, and the Seibert award-winning Electric Ben by Robert Byrd (all published by Dial Books for Young Readers).

Jason is the founder of Books Beyond Borders, a nonprofit community project that has donated thousands of books to schools around the world. He and his wife live in Hoboken, NJ. Learn more at jasonhenrybooks.com, and follow him @jasonhenrybooks.