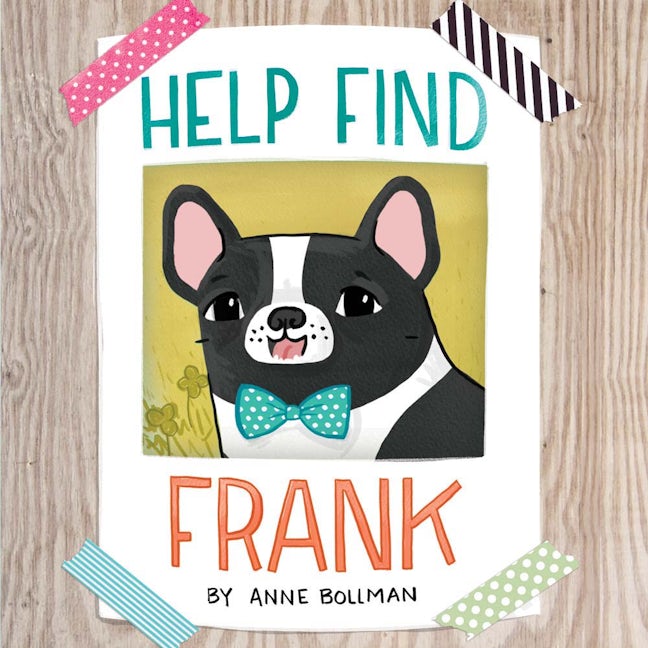 “A smartly structured whodunit sure to please young detectives—so long as they heed the warnings about the toots.” —Kirkus Reviews

Where, oh where, can Frank the French bulldog be? See if you can follow the clues and find the missing pup! Amateur sleuths will have loads of fun with this uniquely interactive book.
Frank loves to run, play, and give slobbery kisses. (He also loves to eat cheese, but DON’T FEED HIM ANY! You’ve been warned.) Then he gets lost—and it’s up to readers to find him. Is he at the park? The baseball field? Filled with detective-style evidence exhibits, maps, and detailed seek-and-find pages, this engaging story entices young adventurers to discover clues that Frank leaves behind—and eventually locate the little guy himself.

“A French bulldog named Frank goes missing, and it's up to readers to help find him. As the search begins, the narrator directly addresses readers to convey key facts about Frank: He loves to run but easily gets overheated; he loves playing fetch but doesn't like to bring the ball back; and he has very stinky toots. These details set the tone for a highly interactive neighborhood romp in which readers will use each new clue they learn to help find the wayward pup. Interviews with various characters—typed out on faux sticky notes or graph paper and taped over each spread—add a forensic touch to the upbeat, mixed-media art. Other interactive details further invite participation, such as a recurring map of the neighborhood and seek-and-find pages that introduce new locations and clues. Bollman's picture-book debut exemplifies how to incorporate dialogic reading into storytime. The open-ended questions allow readers to come to their own conclusions or to use the hints provided to guide them back and forth among pages to put the clues together. . . . A smartly structured whodunit sure to please young detectives—so long as they heed the warnings about the toots.” —Kirkus Reviews

“Bollman’s debut introduces a bow-tie-wearing French bulldog through a sequence of “exhibits” elucidating his personality: ‘Exhibit E: Frank loves to play fetch, but he skips the part where he brings the ball back.’ When Frank dashes after a truck, readers are tasked with finding him, following a map of the neighborhood and clues that kids provide. Stops at a park and baseball field reveal Frank’s paw prints, but the dog is nowhere to be seen. The author supplies a checklist of items to locate in these bustling scenarios, as well as on the spread that finally reveals Frank’s whereabouts (a pool, where he contentedly floats in a swan-shaped tube). . . . Featuring an animated cartoon vibe, Bollman’s crisp, crayon-colored pictures show the objects to spot in plain sight, keeping the challenge to a minimum. A good choice for children on the younger end of the targeted age group.” —Publishers Weekly
-

Anne Bollman began her career in architecture and interior design, then went on to be a lead designer for a large gift and stationery manufacturer. In 2014, Anne started her own studio, Anne Was Here, and her work has been featured in magazines, commercials, and on various retail products. Help Find Frank is her first children’s book. She lives in Los Angeles.