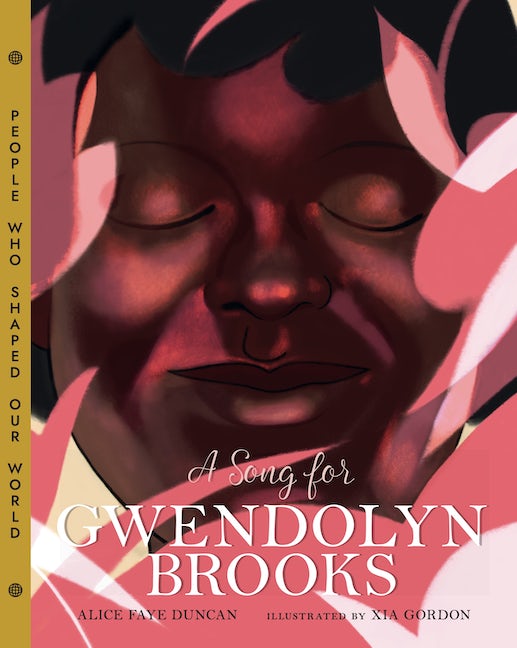 A Song for Gwendolyn Brooks

A Song for Gwendolyn Brooks

“A stirring, accessible introduction to Gwendolyn Brooks and a must-have for all elementary collections.” —School Library Journal (Starred review)
“The combination of biography and Brooks' own poems makes for a strong, useful, and beautiful text . . . A solid introduction to a brilliant writer”—Kirkus.

With a voice both wise and witty, Gwendolyn Brooks crafted poems that captured the urban Black experience and the role of women in society. She grew up on the South Side of Chicago, reading and writing constantly from a young age, her talent lovingly nurtured by her parents. Brooks ultimately published 20 books of poetry, two autobiographies, and one novel. Alice Faye Duncan has created her own song to celebrate Gwendolyn’s life and work, illuminating the tireless struggle of revision and the sweet reward of success.

“Poet laureate Gwendolyn Brooks’s talent with words was evident from a very early age, as this lyrical biography reveals. Against the thrumming backdrop of Chicago in the 1920s and 1930s, with its pulse of trains and blues, Brooks’s story is that of a child whose parents believed in her. It is also the story of a gifted girl who learned to believe in herself despite the teasing of neighborhood bullies and despite the doubts of her teachers. When her teacher did not believe that eight-year-old Brooks wrote something as sophisticated as the work she submitted, Mrs. Brooks marched to the school to fight for her daughter’s innocence. Gwen crafted a poem right on demand, proving her prodigious ability to her teacher and most importantly, to herself. ‘Gwen steps high on her walk home./Gwen smiles brightly./Gwen BELIEVES.’ Brooks went on to become the first African American to win the Pulitzer Prize. Duncan presents the facts of Brooks’s life through concise, powerful biographical poems arranged under Roman numeral headings, distinguishing her own poetry from interspersed poetry by Brooks. Gordon’s spare but affecting illustrations flush the pages with warm rose gold tones, plums, browns, and lavender. Strength and exultation come through with each expressive scene. An author’s note, timeline, suggested readings and bibliography all add to the informative nature and usefulness of this text. VERDICT A stirring, accessible introduction to Gwendolyn Brooks and a must-have for all elementary collections.” —School Library Journal (Starred review)

“In sturdy free verse, Duncan (Memphis, Martin, and the Mountaintop) celebrates the life of Gwendolyn Brooks, an African-American poet whose gifts emerged while she was very young. Brooks’s parents allow her to skip chores to work on her writing, but, early on, a schoolteacher accuses the child of plagiarism. The young poet exonerates herself by writing a verse on the spot titled ‘Forgive and Forget,’ whose lines speak of unjust treatment: ‘If their taunts cut and hurt you,/ They are sure to regret.’ Throughout her life, Brooks stays loyal to her South Side Chicago roots—‘63rd Street is a brown face muse./ Gwen types her poems in a crowded corner’—and, in 1950, becomes the first poet of color to win the Pulitzer Prize. Debut illustrator Gordon offers softly outlined images in warm, earth-toned pinks and browns, evoking sunset on the brick buildings of Chicago and suggesting emotions with shadowy swells of color. Duncan underlines the growth not only of Brooks’s talent, but of her belief in herself and her craft, and her willingness to keep working: ‘Gwen’s confidence is a bud in spring./ Revised... revisions make poetry RING!’ An author’s note and other references are included.” —Publishers Weekly

“This brief biography of the Pulitzer Prize-winning poet features a handful of Brooks' own poems interspersed with original verse about the woman and her writing. The warm pink undertones of Brooks' glowing brown face on the book's cover fade to a muted brown and beige palette inside the book's pages. Simple scenes and images use thick blurred lines and blocks of color as a background to the text as it recounts her life chronologically, from age 8 in 1925 to her winning the Pulitzer Prize in 1950. The poems about Brooks are headed by Roman numerals, I through IX. At first, she is ‘unsure,’ watching and listening to the sounds and behaviors of the people in her neighborhood, writing poems in her journal and burying those that disappoint her. When her teacher accuses her of plagiarism, her mother has her write a poem in front of the teacher to prove her brilliance (the poem is included). Her parents believe in her and leave her ‘free to sit and think. Her process is lovingly described: ‘She learns to labor for the love of words’ through draft after draft. She befriends other poets and studies older poets. ‘She found her light. // And— / A furious flower / GREW!’ The combination of biography and Brooks' own poems makes for a strong, useful, and beautiful text. . . . A solid introduction to a brilliant writer. (author's note, timeline, suggested reading, bibliography).”—Kirkus

“Part paean and part biography, Duncan introduces young readers to the early years and work of poet Gwendolyn Brooks, leading up to her 1950 Pulitzer Prize—the first awarded to a Black writer. Each numbered section is heralded with ‘SING a song for Gwendolyn Brooks,’ the first line of a couplet or triplet that sets the theme for a developmental period or episode in her life. Duncan’s own spare, cantabile verse (interspersed with several selections of Brooks’ own poetry) cuts to the heart of Brooks’ experience growing up in the 1920s Chicago South Side . . .  As readers learn, the observant wallflower has talent and complete parental support (and later, her husband’s support as well) for her single-minded ambition to become a poet; by high school she’s been published, and she hones her skills in writers’ groups: ‘Her words are psalms from a South Side Street./ They are polished and poised like English silver.’ Duncan’s closing remarks and timeline summarize Brooks’ lifetime accomplishments, noting her commitment to mentorship and community support. Economical black line and rounded shape vignettes in browns, mauves, and pinks enhance the individual reader’s experience, but the read-aloud audience will find that Duncan’s text does not require embellishment. .” —The Bulletin of the Center for Children’s Books

“In her smoke-filled neighborhood in Chicago’s South Side, eight-year-old Gwendolyn Brooks wonders if the pink flowers outside her home can grow without sunlight. The flower metaphor continues in this picture-book biography of the award-winning poet. Duncan’s own blues-style free verse recounts young Gwendolyn beginning to write snappy rhymes in dime-store journals. Even as a teacher accuses her of plagiarism and she doubts herself, her parents believe in her gift for poetry. When Gwendolyn gains confidence, she studies influential poets, ‘paints poems with paintbrush words,’ and eventually becomes the first black American to win the Pulitzer Prize. Cared for by her family, Gwendolyn found her light, and like ‘a furious flower,’ she grew. Loosely drawn, digitally enhanced artwork, rendered in pinks, mauves, and oranges, reinforces the flower imagery. Samples of Brooks’ poems throughout give children a true sense of the poet’s rhythm and appeal, while an author’s note provides more details about her life. This book makes a terrific companion to Brooks’ body of work, especially her much-loved Bronzeville Boys and Girls (2007).” —Booklist
-

Alice Faye Duncan’sbooks include Honey Baby Sugar Child, Memphis, Martin, and the Mountaintop, and The Twelve Days of Christmas in Tennessee. She serves as a school librarian in her hometown of Memphis. Visit her at alicefayeduncan.com.

Xia Gordon graduated from the School of Visual Arts with a BFA in Cartooning & Illustration. Her comic Kindling was published by 2dcloud in early 2017 and she has worked with clients such as The New York Times, BuzzFeed, Lenny Letter, and Narratively. She currently lives in Brooklyn, NY. Visit her at xiagordon.com. 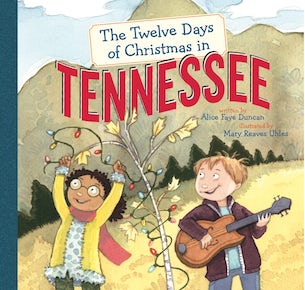 The Twelve Days of Christmas in Tennessee