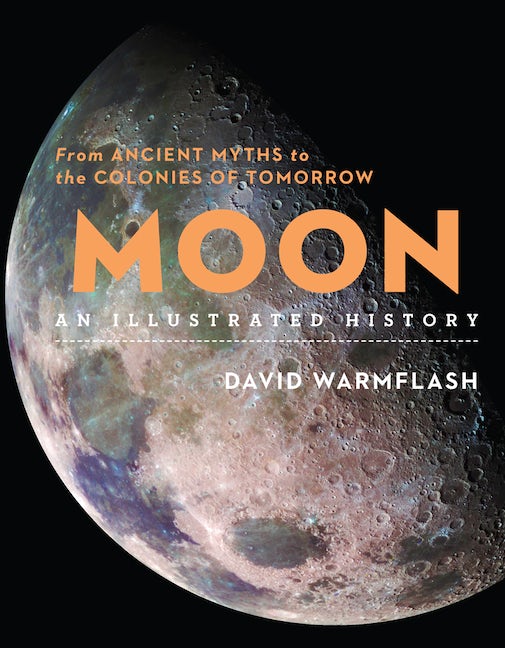 From the moon’s formation, to its potential for future exploration, this richly illustrated volume presents 100 milestones in lunar history.

With dazzling images on every spread, and illuminating text by astrobiologist Dr. David Warmflash, Moon: An Illustrated History chronologically presents 100 milestones in the Moon’s development and exploration. Starting 4.5 billion years ago when the Moon formed, this stunning volume moves from the hypotheses of the Moon’s formation (4.5 billion years ago) to sixth-century BCE predictions of solar eclipses, from the twentieth-century Space Race between the US and the Soviet Union to private space companies and possible future lunar colonies. Find out about lunar calendar systems and cults in the Bible; how lunar brightness was used to estimate stellar distances; how advancing telescopes in the seventeenth century allowed us to eye the Moon more closely; how author Jules Verne inspired the Father of Astronautics; the originals of the Saturn V Moon Rocket; the Apollo missions, and so much more.

“[Dr.] Warmflash, who trained as an astrobiologist, presents a chronological sequence of moon-themed illustrations—paintings, photos, maps, even an astronomical stamp from Djibouti—each with a facing page of explanatory text. These snippets of history range from the moon’s creation in Earth’s cataclysmic collision with an errant planetoid some 4.5 billion years ago to the future construction of lunar bases. In between are micro-essays on topics such as lunar geology, the moon’s role in calendar-keeping, the emergence of scientific ideas about the moon’s physical nature and space exploration. Especially evocative is the portrait of famed aerospace engineer Wernher von Braun, dwarfed by the gaping exhaust nozzles of the Saturn V rocket he helped pioneer.” —Wall Street Journal

“Through the course of human history, the sight of the Moon has captivated humanity’s wildest imaginations, while its nightly presence has been a centerpiece of mythic and scientific hypotheses. Dr. David Warmflash has beautifully chronicled our fascination with—and discoveries from—our nearest neighbor in Moon: An Illustrated History. This fine book should be considered required reading for armchair lunar explorers, young and old.” —Scott Parazynski, MD, NASA Space Shuttle astronaut (STS-66, 86, 95, 100, 120) and author of The Sky Below

"The Moon is the planetary orb that defined my father's life and inspired him to paint the story of man's exploration to its ancient surface. This beautifully artistic book is filled with colorful images, delicate drawings, and fact-filled prose about the lunar body that influences our planet. Naturally, I enjoy the chapter ‘Beginnings of Lunar Field Science’ revealing the Apollo 12 crew of Conrad, Gordon, and Bean's contribution to the study of the Moon. But for me the book's joy lies in learning about the moon myths of the Earth's early civilizations. Moon: An Illustrated History is a valuable addition to my bookshelf, a terrestrial tool that I recommend to explorers, historians, and lovers of the Moon.” —Amy Sue Bean, daughter of moonwalker, astronaut, and artist Alan Bean, lunar module pilot on Apollo 12, commander on Skylab 3

“With this book, and its rich illustrations, astrobiologist David Warmflash weaves a tale of lunar geology and humanity's relationship to the dusty orb.” —Space.com

“Astrobiologist David Warmflash organizes his review of 100 milestones in lunar history based on chronology, page by page, starting 4.5 million years ago with the moon’s formation and ending in anticipation of a “Moon Village” by 2044. With 100 illustrations, the book would fit right in on a coffee table but is compact enough to sit on a nightstand.” —Geekwire.com

“This book addresses just about everything you might want to know about the moon and the intricate ways it’s been intermingled with mankind's existence throughout time. The easy-to-read chapters are short and concise and cover a lot of ground in lunar science, ancient perspectives, past and present lunar explorations, and visions of future endeavors. Each chapter is accompanied by colorful full-page illustrations, diagrams, ancient artifacts, and historic photos, making it all the more engaging. I’m so pleased to include this delightful book in my collection.” —Lucy West, International Space & Science Artist

“Summarizing the Moon's impact on humanity is no small task—that's why I find Dr. David Warmflash's Moon: An Illustrated History to be such a refreshing read. Far from being a door-stopper of a textbook, Warmflash combines short and highly-informative chapters that delve into key points of our relationship with the Moon with beautiful illustrations. This book is as much at home on a coffee table as it is in an academic bookshelf, either for a quick read or as a valued reference resource. If you only have a fleeting interest in that orbiting alien world that shapes our lives every single day, or you're an expert who wants the entire history of the Moon in one book, this publication is for you." —Dr. Ian O'Neill, astrophysicist, science communicator, and editor of the Astronomical Society of the Pacific's Mercury magazine

“David Warmflash has given us a true gift in this season of Apollo—an in-depth and lavishly designed volume that provides a rare look at the history of the Moon. We learn about theories of its formation and early history, and its effects on the Earth—ranging from the rise of life on our planet to its impact on the human psyche across a dozen cultures. Luscious illustrations explain the concepts well, and the images of the Moon are spectacular. By mid-book we are treated to a history of human spaceflight efforts with the Moon as the ultimate goal, and the book concludes with a look at current missions and the future of lunar exploration. You will find stories and images here that you've not seen before . . . highly recommended.” —Rod Pyle, author, journalist, and editor-in-chief, Ad Astra magazine for the National Space Society

"Based on the latest scientific discoveries, and filled with fascinating detail, Moon: An Illustrated History tells the story of the Earth’s closest companion. In clear language and a keen ear for revealing anecdotes, David Warmflash moves seamlessly from geological time to historical time, from the Moon’s formation 4.5 billion years ago to the Apollo landings and on to the challenge of future exploration. Anything you wanted to know about the Moon in science, myth, and history can be found in this beautiful, richly illustrated book." —Amir Alexander, author of Infinitesimal: How a Dangerous Mathematical Theory Shaped the Modern World

“With this book, and its rich illustrations, astrobiologist David Warmflash weaves a tale of lunar geology and humanity's relationship to the dusty orb.” —Space.com
-

Dr. David Warmflash is an astrobiologist and prolific science writer. He was in the first cohort of NASA astrobiology postdoctoral trainees and served as a member of NASA’s Jupiter Icy Moons Orbiter Science Definition Team. He has collaborated with The Planetary Society on three experiments that have flown in space, including “the peace experiment” that involved an Israeli and a Palestinian student working with Dr. Warmflash as co-investigators. He has published in scientific journals and popular science publications including Wired UK, Scientific American, Discover, Air and Space, Astronomy Magazine, and others. He contributed to the book George and the Blue Moon by Lucy Hawking and Stephen Hawking, and was interviewed for an article in the Kansas City Star concerning the accuracy of the science in the sci-fi TV series Orphan Black.