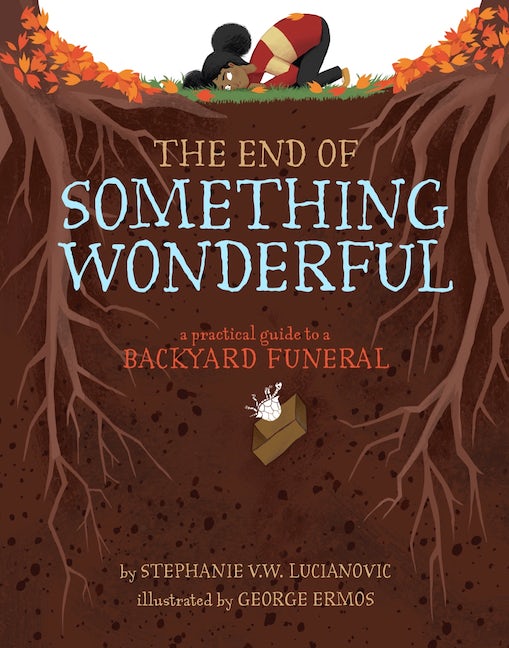 The End of Something Wonderful

A Practical Guide to a Backyard Funeral

The End of Something Wonderful

A Practical Guide to a Backyard Funeral

With gentle humor and quirkiness, this sympathetic book demonstrates how to say goodbye to a beloved pet and give it a proper sendoff.

Children love their pets very much—and when the animals die, that loss can be hard to process. The End of Something Wonderful helps kids handle their feelings when they're hurting and can't find all the right words. In a warm, understanding, sometimes funny way, it guides children as they plan a backyard funeral to say goodbye, from choosing a box and a burial spot to giving a eulogy and wiping away tears. Most of all, it reassures them that it's not the end of everything . . . and that Something Wonderful can always happen again.

“At first glance, a guide to backyard funerals might seem morbid or glib—especially after viewing its lovely animal skeleton endpapers—but this picture book offers earnest advice to kids needing to say goodbye to a beloved pet, using language that is sympathetic but not euphemistic. Lucianovic refers to pets as a child’s ‘Something Wonderful’ and proceeds to offer step-by-step advice for burying, reminiscing, and grieving when Something Wonderful becomes Something Dead. The book opens with a two-page spread divided into four panels, each showing a kid discovering a deceased pet—a goldfish, a turtle, a guinea pig, and a pill bug. Next comes planning a funeral specialized to the pet. A touch of humor is integrated into the practical steps and digital illustrations: finding an appropriate box (such as a shoe box, rather than a Jack-in-the-box) and digging a small hole in the yard (a hippo-sized hole will require a city permit). But emotional expression also gets its due, validating being tongue-tied, sharing stories about the pet, crying, laughing, and even singing. Lucianovic reminds young readers that while a funeral is sad, ‘It’s not the end of everything. You can always begin Something Wonderful again.’ This frank but tender guide offers consolation and hope to children as they cope with loss and move forward to bright, new (Wonderful) things.” —Booklist (Starred review)

“When Something Wonderful (‘like a guinea pig or a fish’) suddenly becomes Something Dead, one might wonder what to do. Enter Lucianovic, whose picture book debut offers an objective guide to the backyard burial. Macabre humor winks at readers behind precise instructions and tips: ‘A WARNING: Don’t get excited and try [to] bury something that isn’t dead. Not only is it rude, but it is also annoying when the Something Dead walks away before the backyard funeral is even over.’ In an accompanying image, a cat covered in dirt glares at its owner as it stalks off. Ermos (Dough Knights and Dragons) matches Lucianovic’s humor with playfully energetic scenes featuring diverse characters with large, expressive eyes in absurd situations, such as taking a grave-digging lunch break atop a deceased hippopotamus. Tenderness also glimmers through the playful morbidity: ‘You could also explain how being dead won’t ever change how much you love [your animal]. But if you don’t feel like saying it out loud, it’s perfectly okay to hug that thought inside your heart, too.’ A sensitive yet refreshingly frank and good-humored resource for children mourning the loss of a pet.” —Publishers Weekly

“[It] is GREAT! . . . It's funny and sardonic and it gets to be touching at the end.” —Betsy Bird, School Library Journal

“Would have been very helpful when I was a kid. . . . [a] unique picture book.” —Mr. Schu, Ambassador of School Libraries for Scholastic
-

Stephanie V.W. Lucianovic's first book, Suffering Succotash: A Picky Eater's Quest to Understand Why We Hate the Foods We Hate, was published in 2012 by Perigee. The End of Something Wonderful is her debut picture book, and her second picture book, Hello, Star, will be released in 2020. She lives in Menlo Park, CA, with her two sons, two cats, and one husband.

George Ermos is an illustrator, maker, and avid reader from England. He works digitally and enjoys indulging in (and illustrating) all things curious and mysterious.