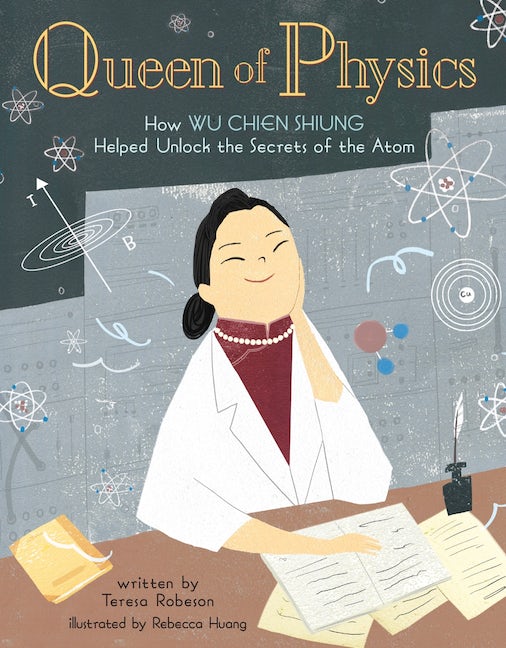 How Wu Chien Shiung Helped Unlock the Secrets of the Atom

How Wu Chien Shiung Helped Unlock the Secrets of the Atom

Meet Wu Chien Shiung, famous physicist who overcame prejudice to prove that she could be anything she wanted.

“Wu Chien Shiung's story is remarkable—and so is the way this book does it justice.” —Booklist (Starred review)

When Wu Chien Shiung was born in China 100 years ago, most girls did not attend school; no one considered them as smart as boys. But her parents felt differently. Giving her a name meaning “Courageous Hero,” they encouraged her love of learning and science. This engaging biography follows Wu Chien Shiung as she battles sexism and racism to become what Newsweek magazine called the “Queen of Physics” for her work on beta decay. Along the way, she earned the admiration of famous scientists like Enrico Fermi and Robert Oppenheimer and became the first woman hired as an instructor by Princeton University, the first woman elected President of the American Physical Society, the first scientist to have an asteroid named after her when she was still alive, and many other honors.

“To have a girl child in China at the turn of the last century was not considered fortunate for most families. But the Wu family was not like most, and Chien Shiung was not only encouraged to go to school (her parents were educators), she was told she could be whatever she wanted. That support was taken to heart, and Robeson details in short but informative bites of text how the young woman extended her education, moving ever further from home and finally to the U.S., where she would delve deeply into her passion, the study of atoms. Writing biographies about people from different times and cultures can have challenges, but trying to explain physics—especially Wu's specialization, beta decay—in a picture-book biography certainly ups the ante. Robeson surmounts these almost effortlessly, getting to the heart of Wu's professional life and simply detailing her many accomplishments, as well as informing her audience how Wu was slighted when it came to awards like the Nobel Prize, with male colleagues taking the honors. The text's accessibility is supported and enhanced by Huang's collage-style artwork that captures Wu's dedication and willingness to take on leadership roles both in the scientific community and in leading political protests in China. Wu Chien Shiung's story is remarkable—and so is the way this book does it justice. A short biography and a dictionary of physics terms is appended.” —Booklist (Starred review)

“A wonderfully written biography of an important woman scientist hardly known outside of her field of physics. Yes, the difficult science is thoroughly understandable in this picture book biography, but it is the heroism and ethical components of the main character, Madame Wu, whom we follow from birth into old age that centers this powerful little book. Not just for little girls, but for children of all ages. About achievement, honesty, hard work that follows a passion. Do not miss this one.” —Jane Yolen, author of Owl Moon, How Do Dinosaurs Say Goodnight, and many other books

“Robeson details the life of Wu Chien Shiung, a female physicist of the mid-20th century who completed important, often unrecognized work in beta decay. Fortunate to have parents who started a girls’ school in China, Wu was educated like her brothers, attended university, and led student protests to ‘resist Japanese invaders’ just before WWII. After moving to the U.S., she investigates parity and beta decay in California and New York, often facing prejudice, and is passed over for the Nobel Prize as her male colleagues receive accolades. All the while, she perseveres, remembering her Baba’s words: ‘Just put your head down and/ keep walking forward.’ Huang’s stylized illustrations feature chalkboards full of equations and backdrops with swirling nuclear symbols. A list of Wu’s “firsts” (first woman instructor at Princeton, for example) and a glossary of nuclear terms close this bittersweet biography of a brilliant woman.” —Publishers Weekly

“This biographic picture book chronicles the life of Wu Chien Shiung, with a focus on her career success in physics, as well as obstacles she overcame as an Asian woman, her political advocacy, and her contributions to science. The book also contains a lot of history specific to the last turn of the 20th century. Huang’s pictures are in full color. On each page, the text amounts to less than a quarter of the page. The vocabulary and text concepts are advanced for a picture book, but key terms can be found in the glossary. . . . This book would make an excellent supplement to support diverse representation, especially about women scientists and/or Asian women battling and overcoming sexism and racism.” —School Library Journal
-

Teresa Robeson was born in Hong Kong, raised in Canada, and now writes and creates from her mini-homestead in southern Indiana where she lives with her scientist husband. A nonfiction winner of the We Need Diverse Books Mentorship Program, Teresa advocates for greater scientific and cultural literacy. Visit her online at teresarobeson.com and on Twitter @TeresaRobeson.

Rebecca Huang is an illustrator from Taiwan who currently lives in the Bay Area. Rebecca received her MFA degree in illustration from Academy of Art University in San Francisco. She is the author and illustrator of Bobo and the New Baby. You can visit her at rebeccamhuang.com.