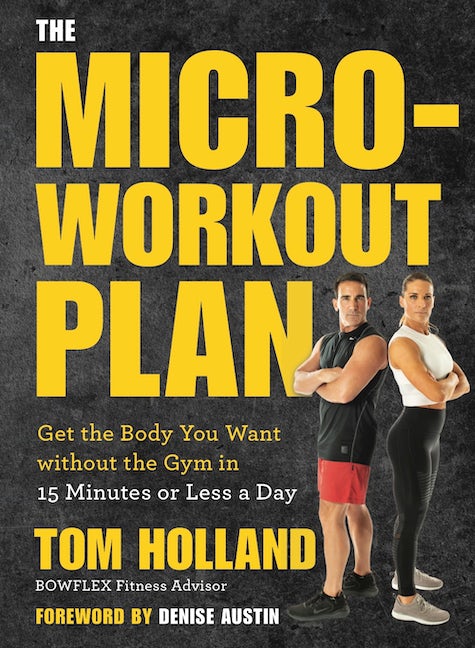 Ditch the gym! It’s not about how long you exercise—or where—but about the type of moves you do. Bowflex Fitness Advisor Tom Holland introduces micro-workouts for optimal health that will help you achieve the body you want.

Does the prospect of spending long hours at the gym deter you from exercising? Tom Holland has a much better approach: “excessive moderation” utilizing manageable micro-workouts that provide maximum, long-term results by engaging your full body, elevating your heart rate, accelerating physical conditioning, and increasing circulation and energy. They’re perfect for the busy people who don’t have time for the gym and want to exercise when, where, and for however long they want. In The Micro-Workout Plan, Tom shares the knowledge he’s gained from 30 years in the fitness industry, debunks myths, explains why micro-workouts succeed, and offers a motivating, manageable method for fitness well-being. He provides actionable steps with 30 5-minute mix-and-match micro-workout routines: just two to four 5-minute micro-workouts a day done whenever and wherever you want will target your whole body and help you achieve the daily activity required for optimal health. Plus, there’s a step-by-step photographic section of 80 exercises teaching proper form. With this book in hand, you can ditch the gym and get the same experience at home.

Tom Holland is an author, corporate consultant, exercise physiologist, and elite endurance athlete. As a Bowflex® Fitness Advisor, he creates content, markets new products, and hosts weekly fitness videos online. He has served as a celebrity ambassador for Core Hydration, ElliptiGO, FRS Healthy Energy, PowerBar, FitVine, Sportwater, and other companies. He has hosted numerous bestselling fitness DVDs, including The Abs Diet Workout, Supreme 90 Day, and Herbalife 24 Fit, which have sold more than one million copies. He has made more than 100 TV appearances, including on Anderson Cooper, CNN Headline News, Good Morning America, HLN, HSN, QVC, and Today. Holland has hosted two national radio shows and appears frequently as a guest on ESPN, SiriusXM, NBC, and Bloomberg Radio, and the Wall Street Journal and Yahoo video channels. He also hosts an iHeartRadio podcast, Fitness Disrupted. His fitness advice appears regularly in national newspapers and magazines. He lives in Darien, CT.