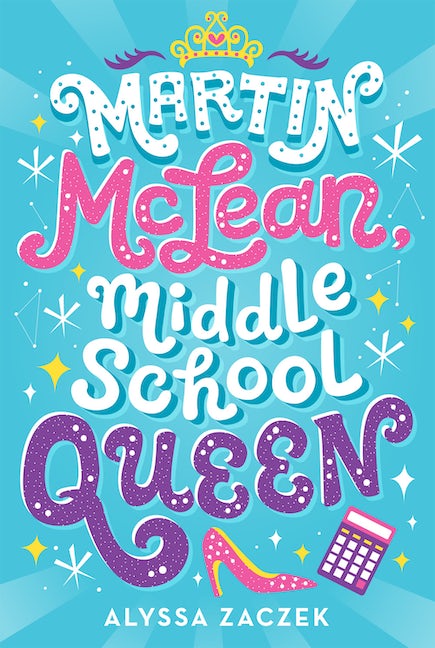 In this bighearted middle-grade debut, Martin McLean struggles to find his voice—and his inner diva—as he navigates friendship, family, first crushes, and a whole lot of glitter.

“An amusing story that's bursting with diversity at every turn. . . . A tasty treat.”—Kirkus (Starred review)

Seventh-grader Martin McLean has always been surrounded by people who can express themselves. His mother is an artist, his colorful Tío Billy works in theater, and his best friends Carmen and Pickle are outgoing and don’t care what other people think. But Martin can only find the right words when he’s answering a problem at a Mathletes competition—until his tío introduces him to the world of drag. In a swirl of sequins and stilettos, Martin creates his fabulous drag queen alter ego, Lottie León. As Lottie, he is braver than he’s ever been; but as Martin, he doesn’t have the guts to tell anyone outside of his family about her. Not Carmen and Pickle, not his Mathletes teammates, and definitely not Chris, an eighth-grader who gives Martin butterflies. When Martin discovers that his first-ever drag show is the same night as the most important Mathletes tournament, he realizes that he can only pull off both appearances by revealing his true self to his friends—and channeling his inner drag superstar.

“Amazing, fierce, and very inspirational . . . this book will inspire kids to express themselves.” —Desmond is Amazing

“Never, in a million years, did I ever expect to read a story about an actual drag kid! It was amazing and inspiring and perfect for kids like me!” —Nemis Quinn Mélançon Golden, aka Lactatia

“A beautiful story of coming of age and self-realization . . . I love this book.” —E! the Dragnificent

“Martin McLean, you'd better work it. Mixed-race (Afro-Cuban and white) Martin McLean's seventh grade year starts out with a bang. On his first day, Martin has a panic attack in math class when a comment made by a bullying Mathletes teammate makes Martin wonder if he's gay. Sensing this conversation might be on the horizon, Martin's Afro-Cuban single mother calls in her brother, Tío Billy, a gay theater producer and sometime drag queen who has been a strong male figure in Martin's life. Billy, sensing the need to help Martin discover a broader community than his school peers provide, takes Billy to an LGBTQ-friendly cafe that's hosting an all-ages drag competition. Bit by the showbiz bug, Martin wants to enter only to realize that it's on the same night as the Mathletes' regional championship. What's a queen-in-training to do? Overall, Zaczek tells an amusing story that's bursting with diversity at every turn. . . .his often naïve approach to life will attract fans of Richard Peck's The Best Man (2016). . . . Readers new to drag culture will . . . enjoy Zaczek's sweetly crafted world. A tasty treat.” —Kirkus (Starred review)

“Twelve-year-old Martin is in a dither: is he gay or not? Nelson, the class bully, has no doubt and teases Martin mercilessly. Martin’s mom, thinking the boy needs a masculine presence in his life, invites his gay uncle, Tío Billy, for an extended visit. Charming and charismatic, Billy takes his nephew to, yes, a drag show where it’s revealed that Billy is a drag queen. Martin is blown away by the show and instantly decides he wants to be a drag queen, too. . . . he sets his mind on competing in an upcoming all-ages drag contest. Also captain of his school’s mathlete team, he is horrified to discover that both the show and the regional mathlete competition are scheduled for the same night. How can he possibly compete in both? In the meantime, he gets butterflies in his stomach whenever another mathlete, Chris, is around. Hmmm . . . Zaczek’s first novel is . . . a good-humored romp with a highly empathetic hero. What’s not to like?” —Booklist

“Middle-schooler Martin McLean is a son, nephew, friend, junior mathlete, and aspiring drag queen. When his Tío Billy, also known as Cassie Blanca, introduces Martin to the world of drag, he is fascinated by it. Upon learning of an amateur all-ages night, Martin decides he wants to give it a shot. The problem is, the event is the same night as regionals for mathletes and Martin doesn’t know how he can do both if his team qualifies. Also, what will his friends and peers think if they discover Martin’s secret? Fun, inspiring, and delightful, this book is far from a drag. The cast of characters is diverse; Martin is biracial and his mother and uncle are Afro-Cuban. One of his friends is Mexican American and another is Vietnamese and uses a wheelchair. Tío Billy is gay, but it is emphasized throughout the book that doing drag does not mean one is necessarily gay. All the same, Martin does find himself questioning his sexuality. The theme of being true to oneself is wonderfully done. Zaczek also does a terrific job of making sure the drag queen aspect is age-appropriate for its readers, even having the drag event set in a coffee house instead of a bar. VERDICT A must-purchase, especially for libraries and communities where Drag Queen Story Hour is popular.” —School Library Journal

“Martin McLean, Middle School Queen is a thoughtful exploration of how we contain multitudes. This accessible, inclusive novel shows we are as infinite as the universe and have the potential to be as bright as the stars. You’ll cheer and root for Martin (Lottie) as he figures out how to celebrate all the parts of who he is. This book will leave you feeling triumphant!” — Donna Gephart, award-winning author of Lily and Dunkin and The Paris Project
-

Alyssa Zaczek is an author, playwright, journalist, and a lifelong lover of words. Martin McLean, Middle School Queen is her debut novel. Originally from Chicago, Alyssa now lives in St. Cloud, MN. Visit her online at alyssazaczek.com and on Twitter @AlyssaDZaczek.