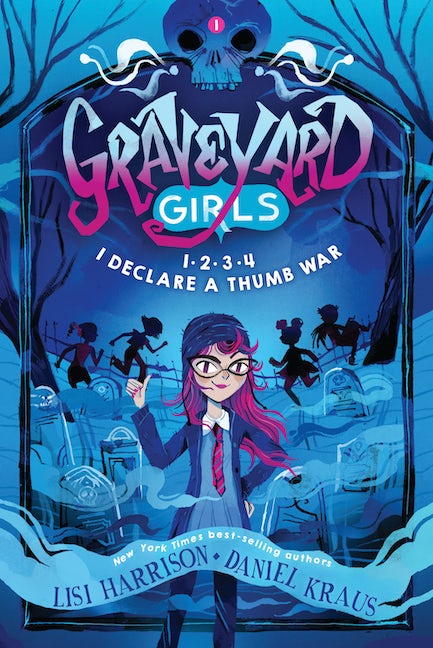 MISERY FALLS, OREGON, IS ABUZZ AS the 100th anniversary of the electrocution of the town’s most infamous killer, Silas Hoke, approaches. When a mysterious text message leads the girls to the cemetery—where Silas Hoke is buried!—life can’t get any creepier. Except, yes, it can thanks to the surprise storyteller who meets them at the cemetery, inspires the first-ever meeting of the Graveyard Girls, and sets the stage for a terrifying tale from Whisper that they’ll never forget.

“The humor is strong throughout, and the story is strongest when keeping readers guessing about what’s real—both in the interpersonal conflicts and the seemingly supernatural happenings.... A good blend of spooky and silly.” — Kirkus Reviews

“This clever, fast-paced story is filled with thrills that will have readers flipping pages into the night.…The town of Misery Falls gives an eerie feeling resembling that of Fear Street’s Shadyside.... A strong first title for fans of scary stories, horror movies, and things that go bump in the night.” — Booklist
-

Lisi Harrison, the queen of teen comedy, has written 37 YA and middle-grade novels including Monster High and the #1 New York Times bestselling series The Clique, which has sold more than eight million copies. Lisi launched two new middle-grade series in 2021, Girl Stuff and The Pack. She lives in California. Visit her at lisiharrison.com.

Daniel Kraus is a New York Times bestselling horror author and co-author of both Trollhunters and The Shape of Water with Guillermo del Toro. His work has been translated into more than twenty-five languages. Daniel lives in Illinois. Visit him at danielkraus.com.