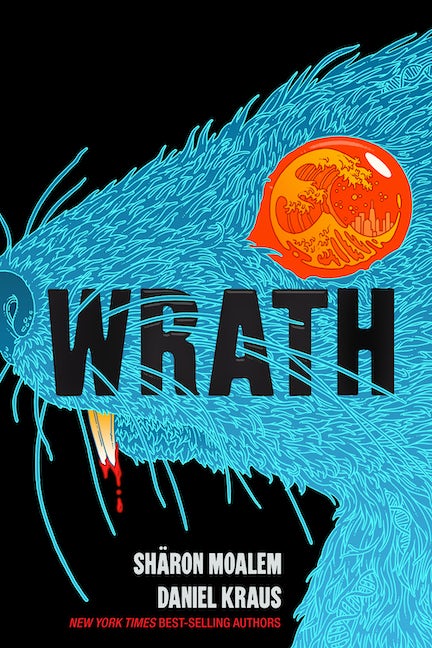 New York Times bestselling coauthors Shäron Moalem and Daniel Kraus's terrifying sci-fi horror thriller takes place in a future that is much nearer than you think. It is a world where scientific experimentation is exploited for commercial profit and under-supervised cutting-edge technology creates a menace that threatens the very fabric of our existence.

Wrath is the story of Sammy, a lab rat instilled with human genes whose supersized intelligence helps him to engineer his escape into the world outside the lab: a world vastly ill-equipped to deal with the menace he represents. Modified through advances that have boosted his awareness of humankind’s cruelty in the name of science, Sammy has the potential to sire a rodent army capable of viciously overwhelming the human race. The key to Sammy’s capture and humanity’s salvation may be ten-year-old Dallas Underhill, whom Sammy adopts. But while Dallas and Sammy bond, time is running out for humankind: once Sammy sires his progeny, the exponential proliferation of his kind could spell the end of the world.

For fans of dystopian works such as Jeff VanderMeer’s Southern Reach Trilogy and Emily St. John Mandel’s Station Eleven, and readers of Neal Stephenson, Michael Crichton, and Blake Crouch. This heart-pounding, science-based thriller takes place in a possibly all-too-soonreality where the hazards and consequences.

“Moalem and Kraus highlight some clever scientific concepts as the narrative details the variety of health problems that plague the Sammy Rats—and the sometimes barbaric methods employed to solve these issues . . . . Sienna and Noah prove ambitious and dynamic as pressure to perform brings out the absolute worst in them.” —Publishers Weekly

“Animals communicating or acting strangely is creepy; rats, in particular, give the book an extra level of sinister vibes. Add in that the rats can talk to humans, and you have an unsettling narrative that will leave you unable to look at rodents the same way again.” —Booklist

“Reading like a cross between a blockbuster movie, a hard sci-fi thriller, and a rumination on the very ethics of animal experimentation. Wrath is a thrill ride from start to finish. It’ll make you laugh, cry, and quiver in fear all in the same chapter. It’s the kind of book that digs into your brain and stays with you long after you’ve read it.” —Geek Vibes Nation

"Moalem and Kraus have put the science back in science fiction. Wrath is grounded in very real technologies, making this grisly thriller about genetic engineering gone wrong all the more terrifying."—Bill Sullivan, PhD, Professor of Pharmacology & Toxicology, Indiana University School of Medicine, and author of Pleased to Meet Me: Genes, Germs, and the Curious Forces that Make Us Who We Are

"Wrath manages to meld a story with elements of horror, philosophy, human psychology, and the realities of animal use in scientific research. Besides being a gripping story, Wrath is a thought-provoking read for anyone who has wondered how to feel about genetic engineering, artificial intelligence and how humans use animals."—Lisa Moses, Faculty, Center for Bioethics, Harvard Medical School -

Sharon Moalem MD, PhD, is an award-winning scientist, physician, and New York Times bestselling author of The Better Half: On the Genetic Superiority of Women, Survival of the Sickest, and numerous other works. He cofounded three biotechnology companies, and his clinical genetics research has led to the discovery of two new rare genetic conditions. He has also been awarded more than 45 patents worldwide for his inventions in human health and biotechnology.

Daniel Kraus is a New York Times–bestselling author. His recent collaboration with legendary filmmaker George A. Romero, The Living Dead, was acclaimed by the New York Times and Washington Post. With Guillermo del Toro, he co-authored Trollhunters (the basis for the Emmy-winning Netflix series) and The Shape of Water, based on the same idea Kraus and del Toro created for the Oscar-winning film. Kraus’s The Death and Life of ZebulonFinch was named one of Entertainment Weekly’s Top 10 Books of the Year.