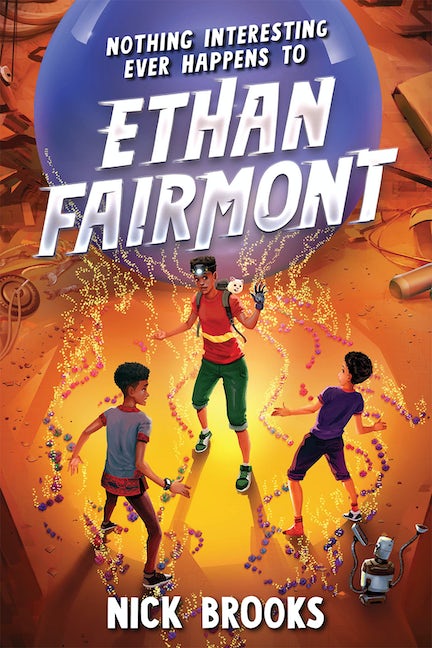 Nothing Interesting Ever Happens to Ethan Fairmont

Nothing Interesting Ever Happens to Ethan Fairmont

E.T. meets Stranger Things in this middle-grade novel series from author and award-winning filmmaker Nick Brooks. With crossover appeal, this fun, engaging series has plenty of nostalgia nods for adults to appreciate as well as young readers.

Something cool happening in Ferrous City? Not a chance. Until one day . . . when self-proclaimed genius inventor Ethan Fairmont runs into an abandoned car factory to avoid a local bully and accidentally stumbles across his ex–best friend Kareem, new kid Juan Carlos, and an extraterrestrial visitor. Cheese (the alien) is stuck on Earth and in need of some serious repairs, spicy snacks—and absolute, total secrecy. That’s easier said than done when mysterious agents descend on Ferrous City to search for Cheese. With time running out and their family and friends in potential danger, can Ethan, Kareem, and Juan Carlos pull off an intergalactic rescue before they’re all found out?

Weaving issues of racial profiling, community struggles, and everyday life in a fast-paced science fiction adventure, Brooks’s debut middle-grade series is destined to be a favorite out-of-this-world adventure for kids 9–12. A timely—and timeless—sci-fi epic for fans of Tristen Strong Punches a Hole in the Sky and the Artemis Fowl series.

“An inventive story with a lot of heart.” —Kirkus Reviews

“Along with cheering for Ethan and his six-eyed, junk-food-loving buddy through adventures both comical and suspenseful, readers are bound to have nuanced reactions to the tale as a whole.” —Booklist

“Your child will race to finish off this quick and fun really great reading option.” —Daily Mom -

Nick Brooks is an author and award-winning filmmaker. His short film Hoop Dreamin’ earned him the George Lucas Scholar Award and he was a finalist in the Forbes 30 Under 30 Film Fest. His short film Bee won the James Bridges and Jack Larson Award for Writing and Directing and premiered at the American Black Film Festival. A rising star, Brooks is poised to be a breakout author with his debut middle-grade novel, Nothing Ever Happens to Ethan Fairmont, and his YA debut title, Promise Boys. Nick currently lives in Los Angeles, California, and is originally from Washington, D.C. Visit Nick at thenickbrooks.com.