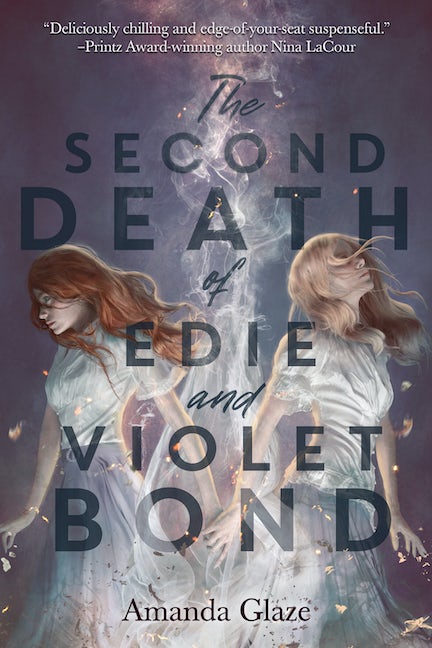 The Second Death of Edie and Violet Bond

The Second Death of Edie and Violet Bond

Cross into the spirit realm with this thrilling supernatural debut about sisterhood and female defiance, perfect for fans of Kerri Maniscalco— inspired by lives of real teenage twin mediums in the 19th century.

Edie and Violet Bond know the truth about death. The seventeen-year-old twins are powerful mediums, just like their mother—Violet can open the veil between life and death, and Edie can cross into the spirit world. But their abilities couldn’t save them when their mother died and their father threatened to commit them to a notorious asylum.

Now runaways, Edie and Violet are part of a traveling Spiritualist show, a tight-knit group of young women who demonstrate their real talents under the guise of communing with spirits. Each night, actresses, poets, musicians, and orators all make contact with spirits who happen to have something to say. . . notions that young ladies could never openly express.

But when Violet’s act goes terribly wrong one night, Edie learns that the dark spirit responsible for their mother’s death has crossed into the land of the living. As they investigate the identity of her mysterious final client, they realize that someone is hunting mediums…and they may be next.Only by trusting in one another can the twins uncover a killer who will stop at nothing to cheat death.

“The timely, gripping themes of sisterhood and fighting misogyny will resonate . . . . An impressive and eerie debut that will keep readers looking over their shoulders." —Kirkus Reviews

"This is a fun historical fantasy with an edge of creepy chiller." —Booklist

“Glaze unflinchingly addresses themes of gender and social inequity in 19th-century America, with Edie using her powers to push back against the restrictions, biases, and laws meant to control and oppress women and marginalized people. The social commentary is explored against a vividly eerie setting, while the central supernatural mystery, infused with elements of romance and action, propels the plot toward a haunting climax.” —Publishers Weekly

“One of the most memorable titles you’ll read this month.” —Paste Magazine

“Spooky historical fiction featuring twin mediums? This one is chef’s kiss perfect for this month.” —The Honey Pop

“Chilling, suspenseful and romantic, THE SECOND DEATH OF EDIE AND VIOLET BOND combines all the best elements of historical fiction in this timely feminist novel.” —The Young Folks

“Glaze’s background in film shines through in this cinematic and spine-tingling debut . . . The delicious slow burn builds to a climax full of twists and turns and a satisfying evolution for our heroines.” —The Bulletin of the Center for Children's Books

“By turns fun and ­terrifying, this suspenseful historical adventure hits all the sweet spots on sisterhood, the supernatural, and budding romance.” —School Library Journal

“It’s a race to find a killer before finding death themselves in The Second Death of Edie and Violet Bond.” —Daily Mom

“Glaze’s top-notch work of risk and courage proves once again that an author’s debut can present extraordinary narrative and insight.” —Historical Novel Society -

"Eerily atmospheric, expertly paced, and with a luscious world you'll want to escape into, fans of The Night Circus will devour Violet and Edie's story just like I did. A stunning debut!" —Gretchen McNeil, author of Ten and #murdertrending

“Amanda Glaze’s debut novel is that rarest of things: a vivid historical tinged with magic, a moving story about the bond between two sisters, a tense, romantic thriller, and a prescient, feminist exploration of the courage it takes for women to set themselves free." —Laura Ruby, Two-Time National Book Award Finalist and author of Bone Gap

"The Second Death of Edie and Violet Bond is a magical, magnificent work of historical fiction. With pitch-perfect dialogue and a sharp eye for detail, Amanda Glaze beautifully brings 1880s Sacramento to life. This is a story I won't soon forget and a new voice you don't want to miss." —Brandy Colbert, award-winning author of Little & Lion
-

Amanda Glaze grew up in Northern California, where she spent most of her time in imaginary worlds. She received a bachelor’s degree in theater from UCLA and an MFA in creative writing from Hamline University. She’s lived many lives: as a bookseller, a theater director, and an Emmy Award-Winning film and TV producer. When she’s not running off to the mountains, she lives in Los Angeles with her partner, where she can most often be found cuddled up with a cat dreaming up ways to bring more magic into the world. The Second Death of Edie and Violet Bond is her debut novel. You can visit her at amandaglaze.com.