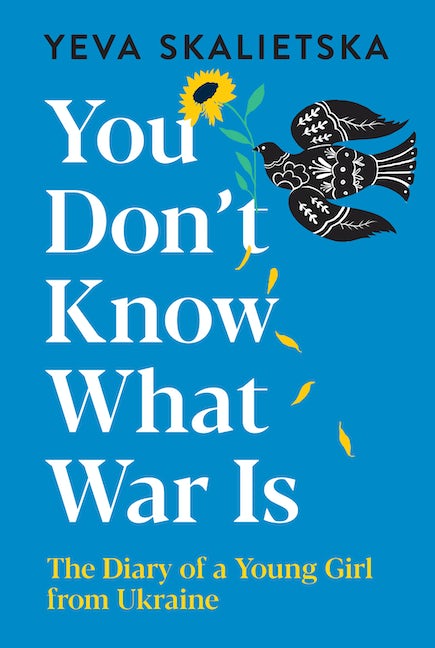 You Don't Know What War Is

The Diary of a Young Girl from Ukraine

You Don't Know What War Is

The Diary of a Young Girl from Ukraine

An inspiring memoir of resilience by a young survivor of the war in Ukraine, as told through her diary entries—a harrowing and ultimately hopeful survival story.

Yeva Skalietska’s story begins on her twelfth birthday in Kharkiv, where she has been living with her grandmother since she was a baby. Ten days later, the only life she’d ever known was shattered. On February 24, 2022, her city was suddenly under attack as Russia launched its horrifying invasion of Ukraine. Yeva and her grandmother took shelter in a basement bunker, where she began writing this diary. She describes the bombings she endured while sheltering underground and her desperate journey west to escape the conflict raging around them. After many endless train rides and a prolonged stay in an overcrowded refugee center in Western Ukraine, Yeva and her beloved grandmother eventually find refuge in Ireland. There, she bravely begins to forge a new life, hoping she’ll be able to return home one day.

“Everyone, absolutely everyone, should read it. You will love Yeva.” —Christy Lefteri, No.1 international bestselling author of The Beekeeper of Aleppo

“Records the immediate sounds and sensations of explosions, sirens, and panic. . . . A firsthand account that shows courage.” —Kirkus Reviews

“Skalietska’s writing is quick-paced and to-the-point, frankly describing her experiences during a horrific time of shelling, seeking shelter, and frantic arrangements to keep moving to somewhere safe. . . Skalietska’s book is empathetic and sympathetic reading for adults and has strong crossover appeal for YA readers.” —Library Journal

“Shows how quickly life can change. An authentic look at seeking safety in war and the upheaval of suddenly losing everything. A quick, powerful read.” —Teen Librarian Toolbox -

Yeva Skalietska is a 12-year-old from Ukraine who has experienced the hardships of war, relating her stories through diary entries that will resonate throughout the world. She now lives with her grandmother in Ireland.