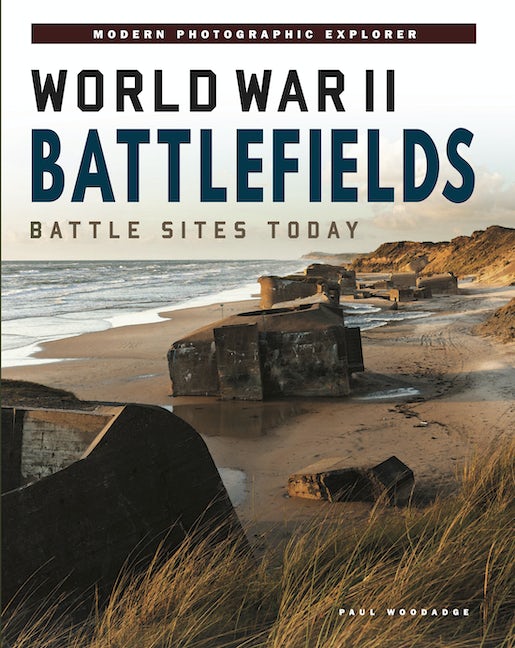 Featuring battlefield sites divided by wartime theater, World War II Battlefields allows the reader to explore well-known battle locations today and compare them to images captured during the height of the conflict.

Examine the huge concrete bunker at Fort Eben Emael, Belgium, captured by German glider troops in May 1940 and still intact today. See the beaches at Tarawa atoll, a scene of fierce fighting between the US Marines and the Japanese defenders in 1943, or the streets of the Ukrainian city of Kharkiv, the center of a bloody battle between the II SS Panzer Korps and the Red Army. Explore the Norman village of Villers-Bocage, where a few German Tiger tanks halted the advance of the British 7th Armoured Division a week after the D-Day landings. Visit the twin medieval towers of the bridge at Remagen on the Rhine river, made famous in photos and movies, or the dozens of Japanese ships sunk in Truk Lagoon following comprehensive American air attacks, and today a popular dive site. Examine Monte Cassino monastery in Italy, destroyed by Allied aerial bombing and since completely rebuilt as a place of pilgrimage. There are 75 sites in all.

Paul Woodadge is a battlefield guide, author, and historian living in Normandy, France. He has spent nearly three decades bringing the history of World War II to an audience of both tourists and armchair history buffs through his tours and as a guest on numerous TV shows. He is the host of WW2TV, a popular YouTube channel that brings together the world’s best military historians to discuss the conflict.