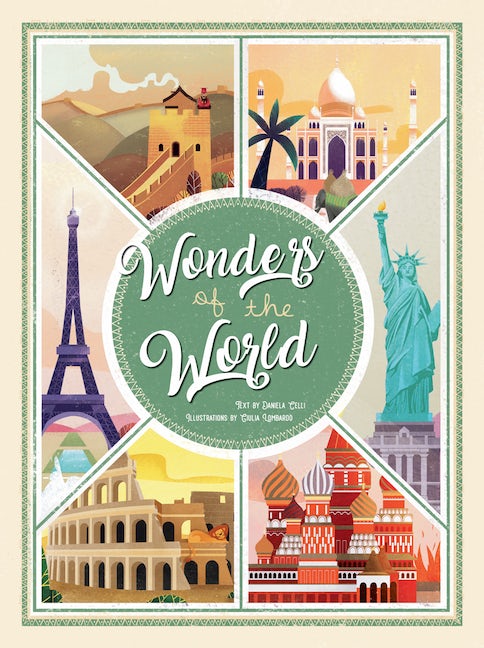 Wonders of the World

Wonders of the World

Explore 31 extraordinary monuments from around the world—from ancient treasures like the Colosseum to the modern Sydney Opera House.

A world of wonders awaits children in this book! From the Palace of Versailles in France to the Leaning Tower of Pisa in Italy, from Knossos Palace in Greece to Mount Rushmore in the US, it presents some of history’s greatest monuments, along with their location, size, and fun facts and features. Each one is marvelously illustrated by Giulia Lombardo, and introduced by a famous character connected to its legend—including Antoni Gaudi, designer of the Sagrada Familia church; Gustave Eiffel, who created the Eiffel Tower; Jane Percy, Duchess of Northumberland, whose family lives in Alnwick Castle, where scenes from the Harry Potter movies were filmed; and Tom Jobim, who wrote a song about the statue of Christ on Corcovado in Rio de Janeiro.

Daniela Celli was born in Florence. After studying piano at the Conservatorio Luigi Cherubini, she moved to New York City where she studied criminology. She returned to Italy to attend law school. She writes a blog about her family’s adventures around the world at mamagiramondo@blogspot.com.

Giulia Lombardo is an illustrator who lives and works in Florence. She attended the Nemo Academy of Digital Arts in Florence and, since graduation, has worked as a freelance illustrator for children’s books, as a graphic designer, and a web designer. She has illustrated several books for White Star Kids.