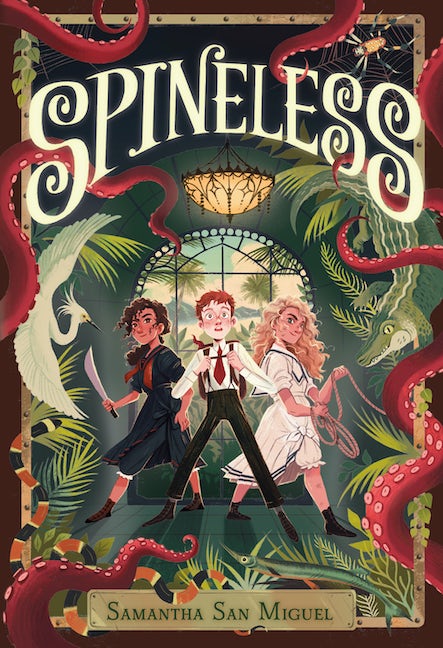 This exciting middle-grade adventure is Hoot for the Gilded Age—with scientific discoveries, secret plots, and surprisingly enormous fauna.
When his asthma lands him at a health resort in the wilds of Gilded Age South Florida, twelve-year-old Algie Emsworth is over the moon. The scientific treasure trove of unexplored swamps may launch his dream career as a naturalist. But even Algie is startled when he happens upon a brand-new species and her brood in the karst springs surrounding the resort. Algie quickly realizes he must keep his discovery a secret: a famous collector of exotic animals is also staying at the hotel, and the new species is threatened by his very presence. An apparent curse has also descended upon the hotel, bringing with it a deadly red tide. But when the pool starts filling with ink and guests start getting mysterious, sucker-shaped wounds, Algie must pluck up his courage to find the truth about the goings-on at the Grand Hotel—and save the new species from destruction.

“San Miguel concocts a comical and exciting tale that leads to a wild, suspenseful, storm-tossed climax while weaving in thoughtful ruminations on the necessity of giving science, people, and nature their just dues, too.” — Booklist, Starred Review

“This exceptionally well-written written story gives a nod to the era's fascination with creepy hauntings and dastardly secrets as it expertly transports readers into the atmosphere of 19th-century Florida, uniting well-drawn, nuanced characters with imaginative and tension-building plot twists.... Pure storytelling at its best.”— Kirkus Reviews, Starred Review

“Algie has a winsome urgency that makes him likable.... His relationships with his family and new friends are realistic and evolve as Algie, Frankie, and Lulu face dangerous adults. In the life-threatening denouement, Algie displays a nuanced empathy for others.” — School Library Journal -

Samantha San Miguelgrew up barefoot in South Florida. Living in this wild, diverse, and exuberant state taught Samantha a lifelong respect for the natural world with both its dangers and delights. Working there as an adult taught her a love for the colorful personalities that crowd the state’s borders. And leaving it taught her that whether in Florida, Cuba, or anywhere else in the world, you can never be an exile if there’s sunshine in your heart.