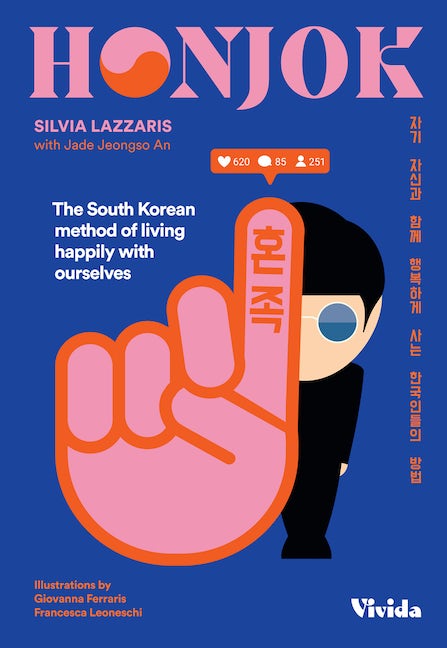 The South Korean Method of Living Happily with Ourselves

The South Korean Method of Living Happily with Ourselves

Honjok is the revolutionary philosophy that teaches us to appreciate our moments of solitude and helps us transform our self-isolation into a new lifestyle.
Up until a few years ago, the word honjok didn't exist. The expression, coined in South Korea as a combination of hon (alone) and jok (tribe), has become a symbol of a South Korean movement that challenges traditional notions of family and social roles. Choosing to live and spend time alone, young South Koreans have found a way to free themselves from social pressures and give new meaning to the concept of happiness. This book describes honjok in all of its facets, among which are honbap—eating alone; honsul—drinking alone; and honnol—playing and spending time alone. Each chapter, identifiable by a specific color, is self-contained and requires no cross-referencing. You are free to approach the book in whichever order you prefer.

Silvia Lazzaris is an Italian researcher and freelance journalist based in England. She specializes in the relationship between technology and society. She publishes investigative reports and in-depth articles in a number of international newspapers, including the Corriere della Sera and the BBC.
Jade Jeongso An is a social media manager, a translator, a writer by day, and an ambitious cook by night. She studied translation and interpretation at Kyung Hee University in Seoul. She became passionate about writing while working freelance for magazines like Dazed Korea. With her words, she tries to educate, entertain, and change the world.

Giovanna Ferraris is a graphic designer and illustrator living and working in Milan. Her illustrations have appeared in numerous books. In 2019, she published Patterns in Art with Francesca Leoneschi and Silvia Lazzaris for Abbeville Press.
Francesca Leoneschi is a founding member and creative director of The World of Dot, a graphic-design studio based in Milan that specializes in illustration and typography, design and text editing, logo design, and branding. She has been an art director for Rizzoli since 2008. In 2019, she published Patterns in Art with Silvia Lazzaris and Giovanna Ferraris for Abbeville Press.